An invitation was extended by fellow students to help create French style cafe music, circa post world war II. The musical project would be a collaboration that would attempt to meet our assessment criteria to engage in ‘multidiscipline projects’. This particular music track would be created for a ‘first-person shooter’ computer game. The scenario is centred on the French resistance to occupation by Nazi Germany.

The reference track is included below.

The key elements of these reference tracks, were identified by the group as follows:

I played guitar with group member Adam Higginson playing a piano accordion part on a synthesiser. Adam used a sound that was hardware based, coming from the bank of sounds, supplied with the Roland Juno sythesizer:

Care was taken to create a minute worth of music that looped as cleanly as we could make it. The reason for this is that the soundtrack would be repeated constantly throughout the game so, it had to be a consistent take with very little room for error. After numerous attempts to make my electric guitar sound more like an acoustic, I eventually played 8 bars of guitar and suggested that the group edit that into 24 bars in Pro Tools. Adam scored a piano accordian part and then a cello and bass line was added via a midi controller keyboard, courtesy of SAE’s tech department.

The software program: Kontact, was used to access the sample library for a cello sound and group member Shay Mitchell, was tasked with performing a ‘live’ cello line. I then edited the midi track within pro-tools in order to get ‘clean up’ the performance and ensure a ‘crisp’ transition from one chord sequence to another and once again create a solid ‘loop’ with no ‘gaps’ between start and finish.

An upright or double bass sound was required to complete the French cafe soundtrack, and group member Brendan Blanch, was tasked with performing the bass part ‘live’ to pro tools, in order to create a midi track. I took some care to instruct Brendan on how to perform the bass part on the keyboard controller and I devised a method to ensure an accurate performance that followed the chord progression of the song. We attached the adhesive paper tape to each key on the keyboard and marked each key with a number and note. Please refer to the photos below. I then did some careful editing within pro-tools, of of each note of the midi soundtrack created. I used the bars and beats grid within pro-tools to ensure that each bass note was exactly 3 beats per bar, as required by the harmonic structure of the soundtrack. 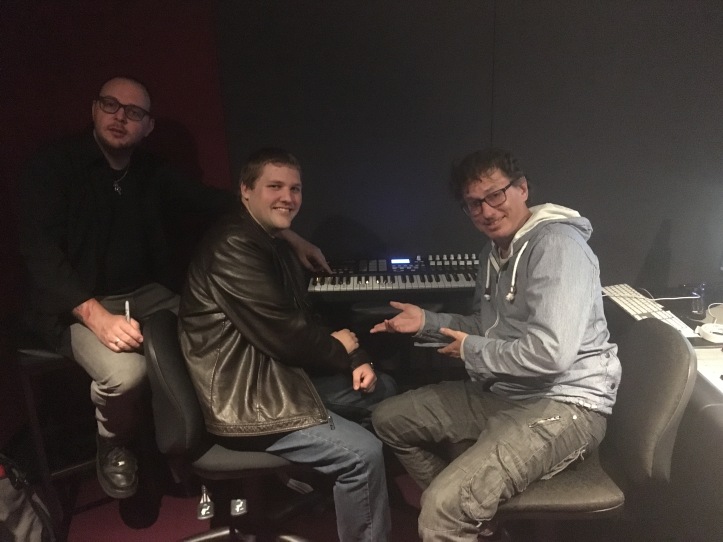